From family company to large international one 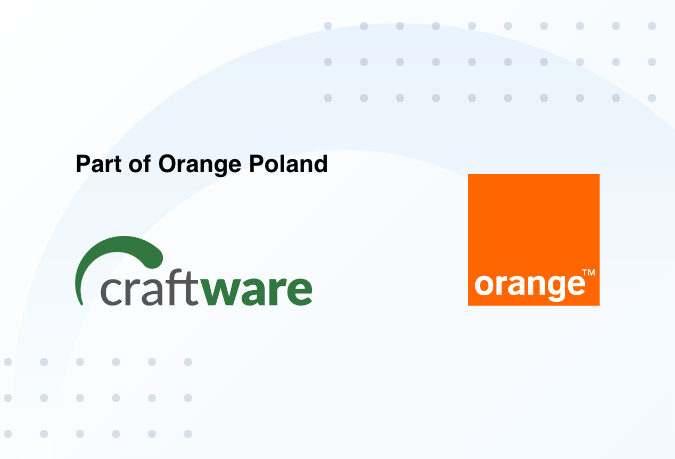 Craftware’s cofounder Łukasz Pietrzak describes how the company went from being a family company to a large company acquired by the international telecom operator and digital service provider Orange.

Łukasz Pietrzak was one of the Craftware founders who opened the business in 2009. During his time at the company, he has taken on many different roles: team manager, developer, vice CEO, and IT architect.

The key to maintaining the company’s soul, but at the same time professionalizing it, was to create common values and policies for employees early on. Transparency and honesty are the watchwords for the business, both internally and externally. Good and open communication with the company’s customers and employees has been crucial in its growth.

Freedom as a driving force

Craftware leaves great freedom to the employees. The company’s various department heads may, for example, recruit the necessary staff themselves and have a significant influence over the teams.

Łukasz Pietrzak is convinced that employees grow faster with the freedom and become more loyal to the company, compared to other more hierarchical companies.

This approach also paid off, as several different M&A (Mergers and Acquisitions) companies contacted the management over the years to buy out Craftware. But it was not until 2020 that the discussions became a reality with the international telecom and IT provider Orange as a potential buyer.

The M&A process, which only a few people at Craftware knew about, took almost a year. With the help of the Polish M&A agency Team Value Partners, a long due diligence process was initiated.

In addition to the internal due diligence work, Craftware’s management also looked at other IT companies that Orange had recently acquired. Craftware wanted to preserve the company’s culture but at the same time develop it in a larger international context.

The M&A process continued and, in the spring of 2020, the Craftware management met several leading executives from Orange. Their attitude to the company’s future was the same as that of Craftware’s management.

The contract was signed on December 7, 2020, and the decision was well received by the company’s employees, based on the feedback Łukasz Pietrzak has received. The company’s operations and culture were left intact.

Orange did not force through any major changes in the company, and Craftware’s expert knowledge of CRM systems and Salesforce remains a niche in the market.

For Craftware founders, the acquisition primarily meant reducing the risk and concern. The support of an international organization such as Orange has also opened new prospects for the company.

Editorial study
Kinga Kisielińska
Text Translation
Did you like my article?