Blocks instead of lines. A tale of fast ROI in IT projects.

Craftware›Posts›Blog›Blocks instead of lines. A tale of fast ROI in IT projects.
Business CRM

Do you know the YouTube blockbuster — a funny video about seven red lines? Yes, it’s the one about a project for seven red lines some of which are to be drawn with green, and some with transparent ink. And all of them must be perpendicular — according to the absurd vision of tenacious customers and the supporting project manager. Everyone insists on completing this awkward order despite the objections of an expert who from the very beginning tries to prove that the task is unfeasible.

Do you want to achieve ROI from an IT project fast? Don’t go down that road!

Business and IT — instead of going to war, we can sit down and talk

Although the video is a clever parody, the business reality is full of such missed ideas, and some of them are made real — this is well known to, for example, employees of advertising agencies. However, the issue is not specific to this industry only. Similar situations are not uncommon in other large organizations, especially in those were business meets (or rather collides with) IT.

“We would like to have a new system to automate and optimize some of our processes” — what happens when sales or marketing departments turn to “their” IT department with such an idea? How is the project carried out? It’s a topic for another article — you can read it here. There, you will learn why projects usually fail, and if they are completed somehow, the budget is exceeded or they are much delayed.

Fortunately, you can do it another way. The era of cumbersome IT implementation is slowly coming to an end, giving up its place to the Agile approach and positive scenarios which prove that business and IT do not have to fight each other, but team up in a smart manner. Then, it is possible to successfully complete a project, and… win a bet for a crate of beer by the way — just as Craftware did on one occasion. We were given this gift by our satisfied client — a known and large online business which faced a challenge due to its rapid growth.

The company decided to sell advertising space on its website. The idea hit the bull’s eye, but the massively increasing number of advertisement reservations and equally rising number of errors, for example related to advertising space quotations, turned out to be a challenge. The employees were simply falling behind with orders. After a series of consultations with the client, we suggested them to implement a reservation system to eliminate this bottleneck.

“We will provide you with the first version of the system in six weeks,” we declared to the client. “Six weeks? We bet a crate of beer that you won’t be able to do that. This is a project for one and a half year.” As we learned later, this had been the deadline proposed to our client by another vendor.

According to our deal, we implemented MVP at the client after six weeks from starting the work on the project. This first step already brought some visible benefits: the sales of advertising campaigns accelerated by half, and the reservation of single advertising space by 10%. The risk of errors that happened to the department employees was reduced by one fourth. Of course, the won bet gave us satisfaction, but above all we were proud of our client’s success. The high level of adoption of the tool was rated “four” by the users,  on a five-point scale.

Small steps towards your business goal

The key to success was the Agile approach and our client’s willingness to carry out the project according to this methodology. We agreed that we would work in small steps focusing on business goals.

But let’s imagine that a client — this very specific one (or another one interested in cooperation) — comes to us with an idea of seven red lines and stubbornly sticks to it. They vaguely explain what they want to use the lines for, or do not explain that at all — just like in the video described before. They do not accept our suggestions. How would such a project proceed? Would there be a chance to complete it?

Working on business goals requires the client to take responsibility for the project. It means a willingness to talk to the implementation partner: to give up forcing your own project visions and trust the suggested solutions. However, this responsibility must be also at the other side which means that the partner is reliable, proved, and experienced knows project patterns and how to translate them into business need, because they put this into practice many, many times. What’s more, they can schedule work properly in time.

Small steps methodology, which means dividing implementation into intervals, enables the business to achieve ROI much faster. Costs are necessary at each stage but — starting from MVP implementation — each and every part of a project brings about visible benefits. As the implemented system grows, the pace at which it starts to turn a profit increases — it is best illustrated by the chart below: the cost and income curves cross very quickly. 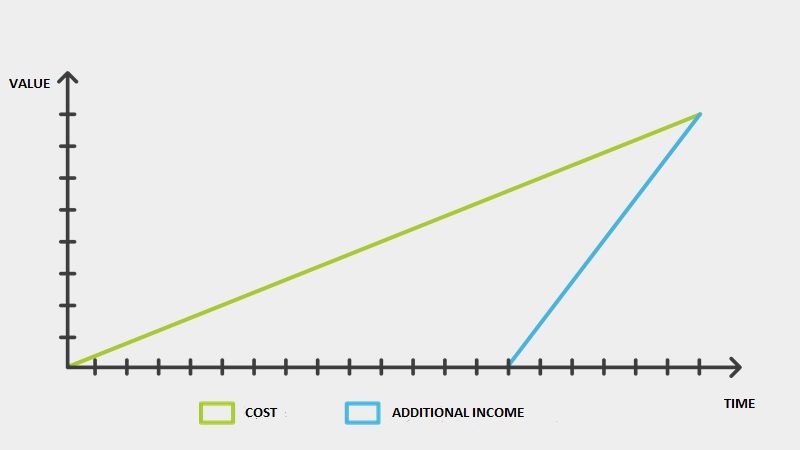 There is also one more element without which the Agile approach would be difficult: access to technology. To implement tools that quickly bring business value and generate the income needed to pay for other functionalities, not only do you have to know them very well, but you also need to have such tools, you need to have the proper technology, such as Salesforce, at hand. Flexibility is one of the greatest advantages of this solution: it allows you to react immediately and extend the range of solutions as the project is carried out.

Executing a project based on Salesforce is like building a structure using Lego blocks. In both cases, we have a catalogue of available solutions, but we also have generic blocks with which we can change, enhance, and enrich the basic products.

Getting back to the seven red lines for the last time: get rid of them and choose… blocks! Think outside the box — software can be built in modules!

Editorial study
Anna Sawicka
Text revision
Did you like my article?

Previous
Next
Craftware sp. z o.o. uses cookies that are necessary for the proper functioning of the website. Subject to your choice, Craftware sp. z o.o. may use cookies for your experience improvement, safeguarding and saving your logging details, managing sessions, statistics, and improving functionality as well as ensuring personalized content of web pages that complies with your interests.
Google Analytics may use your preferences about cookies. The purpose and usage of cookies on these domains remain unchanged. Click “Agree and continue with default Craftware settings” to accept cookies and go directly to the website.Read MoreAgree and continue with default Craftware settings
Privacy & Cookies Policy