Craftware awarded distinction in the Employer of Tomorrow competition 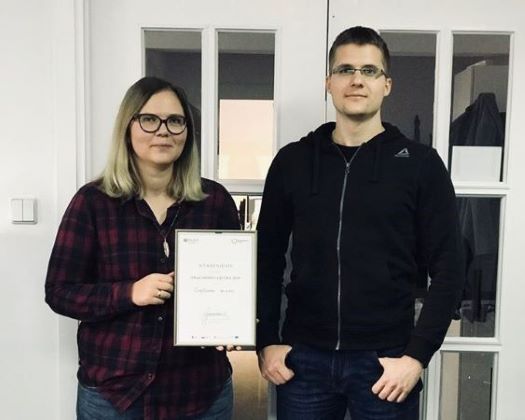 In the past week, representatives of Craftware received the award distinction in the Employer of Tomorrow competition. The jury appreciated Salesforce Academy, which has been organized at Craftware since 2018.

What is the Salesforce Academy?

The Salesforce Academy is an initiative addressed to students/graduates of higher education establishments; to employees who would like to change their career paths and those who have little experience in the labor market. With a view to different addressees of the Academy, we realize four development paths: programming, testing, IT consulting, and analytical.

The Academy is held twice a year, and every edition lasts three months. The study program is created on real project examples, and it has a practical dimension. Also, it prepares to work on commercial requests. The best proof of this is the fact that the vast majority of the Academy graduates are employed by us and work for our customers.

The fifth edition of the PARP competition

The aim of the competition organized by the Polish Agency of Enterprise Development is the highlighting of employers who lead initiatives enabling acquiring knowledge or the evolution of competencies wanted in the labor market.

Sixty initiatives were submitted for this year’s competition. Employers applying for the award in the competition had to prove that their activities are comprehensive, were prepared thoughtfully, and participating in them contributes to the knowledge or employees’ skills increase. Competition entries were judged by a thirteen-member jury whose chairman was vice president of the PARP, Adam Banaszak.

The distinction in the Employer of Tomorrow competition confirms our belief that the direction we took at Craftware is the right one. We believe that it is the man who is our greatest asset, and we develop our business in this belief. We launched the Academy because of two reasons. The first one is the desire to educate people who will join our ranks in the future. And the second one is the desire to share the knowledge with those who are just starting their career or want to change its direction. We are glad our actions help others in finding their career path – said Jacek Zawłocki, CEO of Craftware.

Previous
Next
Craftware sp. z o.o. uses cookies that are necessary for the proper functioning of the website. Subject to your choice, Craftware sp. z o.o. may use cookies for your experience improvement, safeguarding and saving your logging details, managing sessions, statistics, and improving functionality as well as ensuring personalized content of web pages that complies with your interests.
Google Analytics may use your preferences about cookies. The purpose and usage of cookies on these domains remain unchanged. Click “Agree and continue with default Craftware settings” to accept cookies and go directly to the website.Read MoreAgree and continue with default Craftware settings
Privacy & Cookies Policy