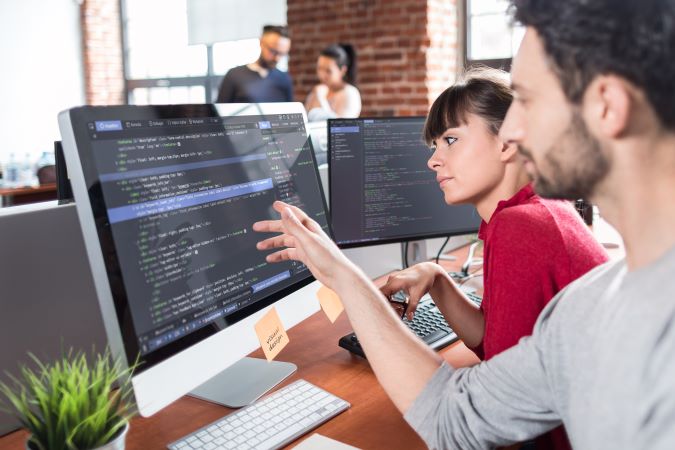 Is software testing necessary? During implementations, we often hear this question. Customers ask this both before starting a project as well as at subsequent stages of working on an application or system. And each time, the answer is yes.

If we care about users’ satisfaction – and no doubt that we do – testing is necessary. Tests allow catching errors that can be made at each stage of app creation. Thanks to tests, the final product’s quality increases; if they are performed correctly, testing reduces the risk that the end-user encounters fatal errors.

Along with questions about testing usefulness, customers also ask which testing type is better – manual or automated? It depends, and because we do not want to leave anyone with such an enigmatic answer, we have decided to prepare a series of publications to discuss software testing in theory and practice. We will introduce the pros and cons of both types, differences between them, and situations in which they work best.

Let’s start with manual testing, that is, software tests that are executed by hand. Basically, it means that a manual tester gets into the character of an end-user and gets through a given app executing subsequent steps manually.

Manual testing is most frequently divided into:

There are various functional testing classifications, including:

After removing an earlier discovered error (a bug, defect), an app should be tested to ensure that fixing has been successful. The manual tester verifies the results of testing based on the description of the reported error, without extending the verification scope. These are confirmation tests, otherwise called retesting.

Regression tests are done after the app is modified. Their goal is to check whether, after fixing an error, there are no other new ones in those app areas that worked properly before. Sets of regression tests are repeated multiple times, and, therefore, they are suitable for automation. Regression testing can be executed at each stage.

Exploratory tests, if an app is not that complex, can be done pretty quickly (in the case of a simple app – even in one hour). Thanks to this, we do not have to spend time preparing the documentation. Also, we get to know these areas for which no test cases were written. It is an excellent method to learn about the app’s operation. The exploratory testing can be executed both at an initial and final stage of the product creation.

Testing is an essential process of product creation. It allows improvement of quality thanks to which end customer gets what is expected. All tests play a significant role in a way to deliver the final product. I will discuss a more detailed description of particular test types in the upcoming articles.