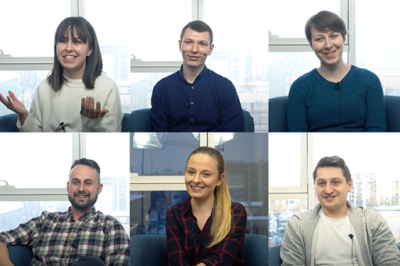 Among them, there are newbies; it’s their first professional experience. For others, it is another step in their careers and a big change due to switching into a different field. To implement plans, some moved to Warsaw from Gdańsk, Wrocław, or Zielona Góra. What brought them together? IT and Salesforce but most of all – Craftware Academy.

Craftware Academy is the original project we have been carrying out for years now. During a paid few-month internship, we educate specialists in different areas: developers, testers, analysts, scrum masters, and consultants. We prepare them to work in these specialties and, obviously, to work with the Salesforce technology – as, since forever, Salesforce is at the core of Craftware’s operations. Little by little, we hit the number of a hundred Academy graduates.

How did they end up at Craftware Academy?

Mateusz, Jakub, and Oskar are studying IT. In their case, an internship at the company from an IT industry is a natural order of things. For people outside of the IT bubble – not necessarily.

“It’s a long story,” says Michał. Before he started his IT journey, he worked in logistics as a road freight forwarder. “Then, 2020 came, and it surprised a lot of people, including me; it caused a need for change. That’s when I discovered my passion for testing. I’ve learned for 7 months intensively. One day I saw a vacancy notice at Craftware Academy. I sent my resume, and after two hours, I got a call from HR that they’re just looking for someone like me.”

Agata, a geodesist of over an 8-years-experience by profession, also got to the Academy thanks to the pandemic, taking a roundabout way. She admits that IT was always on her mind. A year and a half ago, she has decided: a change of industry and a Java bootcamp. And… a COVID-19 pandemic. Not a good time to search for a job. “I’ve been self-learning anyway. And then, one day, a friend sent me a link to your internship, telling me though it’s in Warsaw, I should try, and maybe, I’ll make it. And here I am, partially because of a twist of fate. A big leap. Well, no risk, no fun.”

About her way to the IT industry, Izabela says it was also a circuitous road. “By a degree, I’m a philologist, so who would think I’ll end up in IT,” laughs Izabela. She even planned to start her Ph.D., but, at some point along her philological adventure, she concluded that working as a researcher isn’t for her. “I got a job at a corporation, then another one, and still, it didn’t feel like my scene. Then I decided to change my career and branch out into the IT industry; software testing turned out to be a bull’s eye.”

It all started from a recruitment

With each edition, more and more applicants are willing to participate in Craftware Academy, but until the sixth edition, there was no such boom: this time, we had 1 300 candidates – 72 people per one place!

“Good I found out about such a competition after recruitment was completed, and not before,” jokes Michał. And he says, “I don’t want to show off, but I felt some kind of satisfaction and pride when I discovered it.”

Was recruitment difficult? „In my opinion, no, but it depends on our knowledge and skills,” says Oskar. “Definitely the process was thorough. First – a talk with HR, then the technical one. Mine lasted for 3 hours. I didn’t expect it could take so long.”

Piotr values Academy as its promises are not empty and its requirements are not unrealistic because that often happens in case of other internship or job offers. “These offers are supposedly for a junior position, but they require experience from outer space. It’s impossible to meet their needs. The Academy gives a real opportunity for people without any experience; for people who have potential and are ready to learn.”

Our concept of Craftware Academy is three months of education and a combination of theory and practice. For the first three weeks of the internship, adepts go through the so-called Trailheads – modules prepared by Salesforce that introduce different technology areas step by step. Then, there’s the time for the practical phase of the Academy. Interns work on a project similar to a commercial one, that is, a project we carry out for our customers daily at Craftware.

It’s not the project itself, but Trailheads that turned out to be the most difficult for some Academy’s participants – they are known as survival. 😊

“If you survive Trailheads, it continues to be very cool,” laughs Izabela. So I ask the question: why are Trailheads so hard? “We step into a new environment, and for the next three weeks, we sit in front of a computer; we don’t have any chance to get familiar with each other since everyone just stares at their screens and does their things. You go through a module after a module, and in the beginning, you don’t even know where it will take you; everything seems not quite put together.”

“Eight hours per day of mastering knowledge about a new system. In English, so it requires switching your thinking to another language. Materials are quite easy, though if something is new to you, a lot of focus is needed to acquire as much information as possible,” admits Jakub.

Mateusz confirms, “It took some time, a lot of time. And when we finished, it was a relief we finally could start working on a project.”

Project behind the scenes

Our interns agree: when the project phase started at Craftware Academy, slowly everything added up and even three-month tedious clicking seemed to make sense. “It works,” adepts say. “It” stands for “Trailheads.”  Largely, but not exclusively, thanks to them, the transition from theory to practice was not such a shock.

“It wasn’t like throwing in at the deep end from the start, rather a smooth transition between Trailheads and a project. Besides, though the project was commercial, still, it was arranged for us so that we could progressively get to know the system and its more advanced functionalities during the project realization,” emphasizes Jakub.

For Oskar, the Agile approach to the project’s implementation was an asset. “In my first job, I had no experience with the Agile approach; I learned it at Craftware. Now I know that a developer’s work is not just about writing code, but many other elements that make up the whole. It’s also planning, preparing demos, meetings with the business. I still have a lot of learning ahead of me, but I already have a base that allows me to feel more confident in this real project for the customer.”

The project phase of the Academy recreates the realities of everyday work with customers.

Halfway through, we had an unusual gift for our interns.

“We received an email about holiday surprise,” says Magda. “We expected an integration meeting, maybe a cake, some chocolate, or at least pierogi. But it wasn’t that sweet. We had to change our project teams. Not only were we reassigned to different teams, but also we had to work remotely from now on.” Magdalena admits it was confusing. “Soon, we realized the idea behind those changes. It happens in practice – someone leaves the project team, then a new member joins. We need to adapt to changes quickly, get to know each other as soon as possible. The Academy was to prepare us for that.”

Agata stresses the value of the project concerning the future job as well. In her opinion, the project pushed everything forward. “The customer was particular, requirements were specified, we could use the knowledge gained through Trailheads and test how it works in reality. Thanks to that, we can grow faster. We learned how to cooperate, including the perspective of a role each of us had in the project – developer, tester, or analyst.”

The interns were divided into smaller groups, but they agree that they are all a team.

According to Michał, one essential thing determined it: “From the start, we knew that Craftware is a place for everyone. If we got to the Academy, it meant that all of us have a chance to stay here when it’s finished.”

That’s why – instead of competing – all participants supported each other.

“Rivalry? No way!” says Agata, „We did all joining forces, and if someone was stuck, we motivated one another, not only in a team but also between different teams. No one ever refused to help.”

Mateusz tells us about the satisfaction he had because of the completed tasks scheduled during the sprint planning – such satisfaction as a result of positive sprint closure is really a thing. He adds that besides nice project moments, there were also those great social times. “Cool community, cool people. Traveling together to a food truck, challenging others in chess matches. I’ll miss those.”

“I felt like I would be back in school. In a positive way,” laughs Magdalena, “we weren’t aware that time would pass that quickly. We reached the end.”

There’s something more our interns talk about. Something without which there would be no Craftware Academy – its unique vibe and a happy ending: mentors care! But about that, next time; it’s a subject for another article. Our characters will tell you how they feel about working with the Salesforce technology. After all, this is what bonded them. Stay tuned. 😊

Editorial study
Sylwia Soćko
Text translation
Did you like my article?
If you cannot see the form, consider turning off adblock.